Two of my nephews came to visit over Christmas. Their Mom, my sister in law, told me a while ago they wanted to drop by to see us and visit the shack, but I knew their schedule was busy on their short visit back home. I was pleasantly surprised when they pulled in the driveway. I hadn’t seen either of the brothers in a while. Both of them have a lot going on.

Jim, an engineer living in Manila (the Philippines) is starting his own company there with the hopes of attracting overseas firms wishing to outsource projects. His brother Tim is a graphic artist and stand up doghouse bass player living, working, and playing honky-tonk joints in Austin, Texas. They came with their sons, both three. The great nephews had a good time playing in the yard on the tire swing and in the snow, while their Dads and I were in the shack having a Christmas drink. We kept an eye on them through the shack window. I got out the better Bushmills whiskey for my nephews, the single malt stuff old enough to drive that I keep tucked away. It tasted so good we had another. Tim was at the house and had seen the shack when it was halfway built but Jim had not.

“I’ve seen the outside of the shack on line,” Jim said. “But I always wanted to see what the inside looked like.”

Both Jim and Tim read this blog. I forget who’s reading this thing. By reading regularly they feel as if they knew what I was doing. But they wanted to know more about the shack. It’s a small place you know, 121 square feet, but they were curious as to where I got the idea for the design, how it was all working out, the insulation, the wood stove. As we talked they kept looking around and asking me about things they saw. Tim spied a little black and white framed photo on the wall.

“Is that Dylan?” Tim asked.

“Yeah. I snuck a cell phone picture of a picture in the Rock and Roll hall of fame.”

“How about that mask up there?” Jim asked looking up at the peak of the rafters. “Looks like a blue eyed devil.”

“It is. Dean and I bought it at the market in Chichicastenango in the Guatemalan highlands. We were there on an I Care mission.”

“And that blue circle thing up there?” He pointed to the opposite gable end.

“A gift from Kerem, Moe’s old boyfriend from Turkey. I forget the name of it. It keeps away the evil eye.” Kerem helped a lot while I was building the shack.

“And how about that picture?” They stepped closer to a little black and white on the wall.

“That’s the original shack. Two Australians and I built it on the Pacific coast of Ecuador, on land that no one seemed to claim, outside a little town called Sua. Hacked out a little clearing in the jungle on the edge of a cliff looking over the ocean. I lived there about three months. See? It had stick half walls on the bottom and plastic you could roll and unroll on the top half, with a plastic roof covered by palm leaves. So close to the equator down there you didn’t need much shelter, more a place to get out of the sun.”

“Yeah. We each slept under full mosquito nets. And rats. We hung our food up at night with a coconut shell as a baffle on the rope so the boogers couldn’t get to it. Small inconveniences for such a beautiful place though. Went into town about every five days for supplies. Had to time the trip with the tides or the beach would be gone and you’d be washed against the cliffs and the rocks. We ate papayas off the trees. Closest I ever got to completely free living.”

“Uncle Dave,” Jim said. “I keep thinking you’re going to write that story about Scotland but I haven’t seen it on the blog.”

“About working with the Irishmen. You got a job through some people and they paid you cash? You were just out in the countryside and there was no safety or anything? They didn’t even know your name?”

“Did you read that or was it something I told you?”

“You told us at our house in Level Acres.” When I met Tim and Jim they were little kids living in a split level house in a nice subdivision near Geneseo before their Mom and Dad moved to a bigger place in the country. “I don’t know if you told us in particular or whether you were telling the grown-ups and we just listened. But I never forgot that. It was quite a story. You remember it Tim?”

“Yeah. They called you Yankee.”

“That they did,” I said. “Why do you think you both remembered that story?”

“I think because I’d heard of people doing things like that, I mean I was somehow aware of backpacking and hitch hiking, I’d seen it on TV or something, but I’d never really met someone who did it. And there you were. And you were a regular person.” Jim said.

“Yeah,” Tim said. “I mean we knew people that traveled with their job, or took foreign vacations. Our Dad traveled to Europe for work back then. But to quit work, to go places for that long, not knowing what was going to happen, to just improvise. That was brand new. And because you did it we knew it could be done.”

“Yeah, and it sounded so cool to us as kids,” Jim said. “Heck it still sounds cool.”

“I don’t know that I’ve written that down,” I said.

“Well, maybe you should.”

“You know Uncle Dave, we didn’t know that story you wrote about Dad working on the railroad in LaSalle till we read it in your blog. He never told us. Now we know.” Tim said. When I wrote a story their Dad Tom told me about burning down a freight car, I never thought I’d be communicating something new to his family.

“Yeah, you might be right. Maybe I should write that story about Scotland. But do you think you like it because you know me and we’re part of the same family? Or would you like it just as much if it was written by someone you don’t know?”

“I don’t know,” Tim said. “How did your other readers, the ones that don’t know Dad, like the railroad story?”

“They liked it. I had good feedback on that piece.”

My great nephews Kyle and Lex, Tim and Jim’s sons, interrupted our conversation by bursting through the shack door, simultaneously reporting on an altercation, airing grievances as it were, related to someone pushing someone else down in the snow. It wasn’t clear from their account of the incident exactly what occurred or who was at fault. To remedy the situation their Dads took their sons in their arms and held them on their laps. They needed to warm up anyway. It was nice and warm by the woodstove. The fight didn’t last long. Jim was still looking around the shack.

“And what about that hammer?” He was looking at an old tack hammer I have hanging on a nail by the stained glass windows, which we’d discussed earlier, custom made by a friend of mine especially for the shack.

“Uh, I’m afraid that’s just an old hammer. Not everything in here has a story.”

“You should make one up.”

Catching up on old relationships is the best part of the holidays. I realized I’d known those brothers, my nephews, for over 34 years. I’d watch them become men. If I can stretch this out I have a chance to see their sons grow up too.

It came time for them to go and we said our goodbyes. “Don’t stay away so long next time. And bring your boys back to see their Great Uncle when you come.”

“We will. Keep the stories coming,” they said.

E mail, Skype, and Face Book are great but nothing beats a real visit. 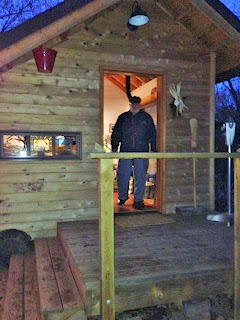 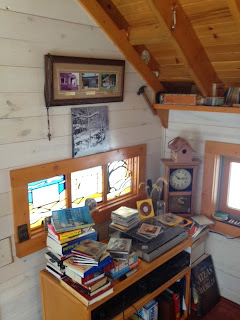