So far it’s been a good year for the McClure garden up here on Fields Hill. I picked and ate way more asparagus than usual. I harvested stalks from our one rhubarb plant and baked a pie. Unlike most years, I managed to plant early rows of spinach, leaf lettuce and radishes. As I had hoped to do for many years, I got four Brussels sprout plants in the ground while it was still cool, giving them a head start on the summer heat. Not only has the weather been mild, with timely rains, but something else has changed. I now have time to think about it.

It’s not only the time I devoted to work, the hours from when my car left the garage until it returned, but the space work occupied in my brain if you will. Use any analogy you want, the brain as a hard disk, the brain as a bucket, or the mind as a crowded mess of facts, appointments, looming decisions, emotions and worries. Mine was full. For years the garden was one of many things pushed out, forgotten, ignored. Here’s how it went.

Take the asparagus for example. It was easy to remember to burn off the asparagus each Easter because that was a tradition on the farm. There, just past the clothesline, we had a big patch, 10’ x 20’ maybe. No one knew who planted it originally, but it had been well taken care of through the years. Sometime after we’d been to church, had our pictures taken by the blue spruce tree in the front yard, hunted Easter baskets, eaten a big dinner, and changed out of our church clothes Mom sent one of us kids out to the asparagus patch with farmer matches to burn it off. Tall chest high stalks, thick with ferns matted together, brown from having stood all winter, it seemed always dry and ready to go. All you had to do was gauge the wind, light the side of the patch opposite the way it was blowing, and stand back. It was a show fit for a pyromaniac; billows of white smoke, balls of orange flame, furious crackling, gusts of heat and ash, and no sooner had it begun to burn than it was over. All that remained was bare dirt and stubbly charred stalks. For the rest of spring we simply watched purple asparagus buttons poke through the ground, cut them when they were 4 inches or so high just starting to green, and ate them until they got tough and spindly. Then we salted the patch, throwing table salt from a coffee can over the entire thing, and let it grow up again into tall stalks with thick ferns. Each year we did it all again. That’s what I had in mind when I planted asparagus roots in a long row across the edge of my little town garden, just South of the garage, ten years ago. But most years I did little more than burn it off at Easter.

As days get longer, and the soil holding asparagus roots begins to warm to the sun, spears poke through the ground and shoot up fast. Amazingly fast. To do asparagus right, you need to check it every day, cutting the stalks at the right time, when they’re tender. All it takes is a stroll with a pocketknife. Cut one, put it in your hat, consider cutting another but leave it for the next day, cut more, get a meal’s worth. Note other stalks just beginning to come up, spotting them for later. For a little patch like mine it takes only a few minutes. But neglect it and you’re cutting the tops off tall stalks, realizing others have grown past the point of picking. You kick yourself for letting half of it go. Some years I’d have no more than two meals at most. I’d burn it off, knowing full well it would be ready to eat in a week or so. I might remember it in two weeks while pulling my car in after work, too tired once I got in the house to come out again. Then one morning, late in a suit and tie, I’d pull out of the garage and see tall stalks waving in the wind. I couldn’t find time to include asparagus in my life. Thoughts of home grown vegetables were replaced by some bad foster care case, the budget, a staff person struggling to do her job, one of a hundred different things.

This year was different. I boiled asparagus and ate it with butter. I creamed it, baked it on a cookie sheet with olive oil and salt (dusted with parmesean before serving), put it on the Weber with slabs of salmon, and gave it away to the neighbors. Sometimes we’d be eating asparagus twenty minutes after it was cut. God it’s tasty. Call 2014 the year of asparagus in the McClure garden.

Other stuff is on the way. I was a little late getting my radishes in but in a week or so I’ll be pulling those. My Mom and I used to arrange thin circles of radish on a single piece of Colonial white bread with butter, salted, with maybe a scallion sliced in with it. Fold it over. If I close my eyes I can taste it still.

I planted twelve Roma tomato plants. I cook them down while fresh to make chilla sauce, a sweet relish for roast beef made with cinnamon, clove, onions and sugar. The rest of the Romas I freeze for pasta sauce and chili through the fall and winter. I planted eight more tomatoes for slicing and BLT’s (four early girls and four better boys), and one grape tomato plant for salads and popping in your mouth while in the garden pulling weeds. I managed to get all the tomato and pepper plants in right before those nice rains we had last week.

A friend gave me four very healthy tomatillo plants and I can only find room for two. I’m giving one to my friend Sharon who has a very organized raised bed garden. If you want the last one let me know. I planted two kinds of garlic last fall on Halloween, creamy white and spicy purple, and put some onion sets next to them not long ago. I plan to put in a fall crop of green beans after I pull the garlic and onions, probably around the 4th of July. Think I’ll try pole beans. I put in a lemon grass plant but the rest of the herbs, mostly basil and thyme; I put in pots this year to save room. We have herbs coming up like perennials, oregano in the garden and chives in one of Colleen’s flower beds. I put in two cuke plants, one doing a lot better than the other. And pretty much the rest of the garden is peppers.

It is difficult for me to stop buying peppers. I make my own Jamaican jerk sauce, so I grow a lot of Habaneros. I grow serranos because they go so good with tomatillos in fresh green salsa, spiked with salt, onions, and lime. I planted jalapenos, trying to avoid buying those giant hybrid things they’re attempting to pass as jalapenos these days. They’re not hot, those big jalapenos. Who wants a jalapeno that’s not hot? I planted cayenne peppers, and Thai hots, along with some mild Anaheims and poblanos. Are they poblanos when they’re fresh and anchos when they’re dried? Or is it the other way around? Anyway I’ve got them. I bought an orange bell pepper plant just for grins. I’ve never been able to grow bell peppers in the garden better than those I can buy in the store. That single orange bell plant represents one more try. I wanted to plant some spicy red globe peppers, like pasillas, and those long sweet Italian reds but couldn’t find any. Not that I had room.

The main purpose of all these peppers is a chili paste I’ve been making for quite a few years now. I call it Irish Asian, in that it’s an Asian, specifically Thai style paste grown and put together by an Irish guy. It’s something like Sriracha sauce only not as creamy. Sometimes I roast the peppers. I always add lemon grass. It’s a fluid recipe, more concept than prescription. It ends up canned in small Mason jars. My kids and I eat in on most everything.

Oh and I’m growing four mystery peppers for my friend John, the guy who gave me the tomatillos. He brought the seeds all the way from Guadalajara. When they bloom I’m going to put cheesecloth over the plants so they don’t mix with the pollen from my other peppers. He claims this is an ancient strain of Mexican pepper unlike anything else we have around here. It’s hard to believe a pepper plant that grew up, along with it's ancestors before Columbus, in Southern Mexico is going to flourish in an Illinois summer. Can it possibly produce the same peppers this far north? Like everything in anybody’s garden, you have to be patient and see how it turns out. He gets the seeds, I’ll eat the peppers.

It’s entirely possible I over did the peppers and overcrowded available space. Too many plants will stunt the growth of all of them. I just couldn’t leave any out. My biggest space invader is the corner patch of horseradish which started as a few roots from my friend Jim who owns the roto tiller. Having a friend who owns a roto-tiller is better, I think, than having one yourself. I use it twice a year, and honestly the garage won’t hold one more contraption with an engine. I already have a riding lawn mower and a snow blower. We make a day of the roto-tilling, have lunch, and knock back a few drinks. It’s friendship and farming combined. I hope he likes the arrangement as much as me. He’s a reader of this blog. I have a feeling he’ll tell me.

Where was I? The horseradish. Jim gave me two rhubarb plants and three or four horseradish roots years ago. I lost one of the rhubarb plants, froze out the first year I think. And while the remaining rhubarb plant has stayed about the same size, the horseradish has gone crazy. Seriously, it’s out of hand. I can’t seem to get rid of it. When I dig the horseradish and grind it I do my best to get every root possible out of the ground. Each time I think doing so will set it back considerably. On the contrary, I think it thrives on the challenge. Each year it seems to get bigger. Horseradish grows giant leaves that end up shading my peppers. I do nothing to help it. I don’t water it. I don’t care for it. I hate to think I have to poison it to scale it back but in truth I have what I must admit is a horseradish problem. Advice welcomed.

So that’s the crop report from Field’s Hill in Ottawa along with this observation. Gardening beats work all to hell.


P.S.-For those of you who read last week’s post, I’ve attached a picture of Denny’s shelf. Just got it finished and up yesterday. Handsome piece of work don’t you think? Maybe I’ll throw in a pic of the garden in a few weeks. 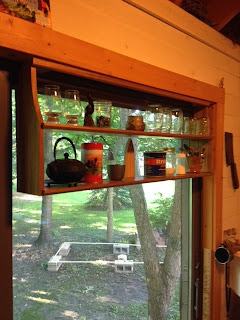