There are eighteen 4-H clubs in LaSalle County. You have your Pouncing Panthers, South Prairie Pioneers, Pacesetters, Leland Ribbon Winners, North Prairie Kids, Fox River Warriors, Dimmick Braves, Covel Creek Rough Riders, Brookfield Indians and my favorite, the Hustling Hoppers. The Hustling Hoppers must have chosen their name when being known as a hustler meant you worked hard and quickly. I don’t know what the hopping is about. Eighteen 4-H clubs for LaSalle County is a lot of clubs for a county of just over 110,000, I’m guessing.

This blog interrupted by an urgent message

For the past two mornings I’ve been glued to the TV, rather than being out here in the shack, following two events mainly; the Malaysian airplane carrying 298 innocent people which was blown out of the sky over Ukraine, and Israeli ground troops rolling into Gaza. OK, yeah, from time to time I checked in on the British Open. (Tiger blew up on the second day and Rory McILroy ran away with it by the way.) I listened to our U.N. Ambassador’s whole speech on the downed Malaysian aircraft, Obama’s hurried remarks , John Kerry, and even the panel of aircraft disaster experts CNN reassembled. Bill Clinton weighed in from Vietnam. I listened to Wolf Blitzer talk from Tel Aviv about Israel’s incursion into crowded Gaza. I checked the New York Times website on my smart phone. I couldn’t stop myself. The story in the Tribune on the driveway became old news, but still important.

As I watched TV news I became mindful that previously important stories: the rogue nation being formed in Eastern Iraq and Western Syria, ongoing instability in Afghanistan, violence in Central America and the immigration crisis on our own southern border, are now pushed aside just as Ukraine and the plight of the Palestinians once were. Our attention, limited it seems, is entirely pulled one way, then another, by crises.

In fact, it was the Israeli/Hamas conflict that first diverted our attention from the hot mess created by Ukraine, Russia, and rebel separatists. Now both are vying for our limited attention. Who knew until the tragedy that many planes had been previously shot down in the contested region of Ukraine? That they were Ukranian military aircraft seemed not to warrant news. Who knew powerful and complicated missiles capable of shooting down aircraft at altitudes greater than 30,000 feet were in the hands of rebel groups on the Ukraine/Russia border? Well, we know now, and we found out the hard way. But as the world falls apart overseas, the quiet movement that is 4-H goes on in LaSalle County.

The four H’s stand for Head, Heart, Hands, and Health. Supported in Illinois by the University of Illinois, units of local government, and private donations, and similarly funded across the country, 4-H represents the largest youth development organization in the nation. And it does so pretty quietly.

You notice 4-H most when the fair is on, and the rest of the year 4-H is not real visible. But they‘re out there, having meetings, planning projects, getting to know one another. The adult leaders are volunteers, like Cub Scout and Boy Scout leaders. They become something of mentors to the kids involved. Traditionally 4-H was made up of farm kids, kids who lived in the country, but increasingly town kids are involved.

I was in 4-H for a short time. My club was Danvers Industrial Youth. We may have been industrious, but there was nothing industrial about us. We were all farm kids, and most if not all of us had animal related projects. I showed a Jersey heifer at the fair, my friend John Nafziger brought pigs, Tom Walsh brought his horse. Most farms were small then and nearly all had livestock. In my school in Danvers, population 800 (27 in the class of 1969) there were more country kids than town kids by far. I think that’s all changed. Advances in machinery have made large scale farming possible, along with a host of other factors. The farms are so much bigger, primarily grain operations without livestock, and as a result fewer kids are living in the country. I can remember whole places now gone where houses stood, surrounded by shade trees, vegetable gardens, and yards where people lived, raised kids, and died. The corn cribs are torn down first, then the barns, and finally the old farmhouses disappear. Everything changes. Farm life sure has. 4-H has had to change with it.

After I judged the baked goods Thursday I went back on Friday to see the farm animals and watch some of the livestock judging. I was pleased to learn there are still Jersey cows at the LaSalle County Fair. No Guernsey cows though, or Ayrshires. Holsteins, Jerseys, Milking Shorthorns and Dutch Belted made up the dairy show. Dutch Belted? Never saw one as a kid. The dairy cows belonged to the very few area families still milking cows, with the Hoffmans from Earlville taking most of the honors. At time there was only one cow in an event. Even the Holstein class was small.

Unlike my role as judge of baked goods, the dairy judge was the real deal. He had a microphone and explained (to a very small audience) why he rated one cow better than another, commenting on their udders, how they stood on their back legs, their rib spread which he called “capacity.” He’d obviously studied diary judging, and cow confirmation. Showmanship was also a factor. One poor girl’s heifer just wouldn’t let itself be led around the show ring on a halter. While he liked that cow’s make up better than others, he placed it lower because of a lack of cooperation. That’s the responsibility of the 4-H member, making sure your animal meets the standards, which includes its behavior. The kids showing animals in the ring were gracious whether winning blue ribbons and getting last. In fact, the atmosphere of the whole fair was calm. Close to polite.

For example, while waiting in the lunch line for a fair cooked lunch and homemade pie the little boy behind me, waiting with his Mom and the rest of the family, tapped me in the back and said something softly. Actually I thought someone was talking near me but I couldn’t place it. Turns out it was this little kid whose voice was coming from below my waist.

“You have a tag on your pants.”

“You have a tag on your pants.” With that he picked at something on my jeans. They were new Carhartts from Farm and Fleet, dungarees with the hammer loop and pliers pocket.

“He hates tags,” his mother said loudly. “Obsessed almost. He wanted me to tell you but I told him he had to.”

I looked on the back side of my thigh and saw a long narrow tag telling everyone my waist size and inseam, over and over. I pulled it off, rolled it up into a little tube, and put it in my pocket.

“Thanks pal. I hate tags too.” He looked away shyly. He couldn’t have been more than eight. Cute, quiet kid. I could have been looking at myself fifty five years ago, a farm kid at the fair with his Mom.

After the dairy show I went to the poultry barn and caught part of the chicken show. I’d never seen chickens shown at the fair. There is a row of empty cages that 4-H members put classes of chickens into so the judge can inspect them. As he makes up his mind on the order of finish, which hens or roosters or mixed pens of a certain ilk rank above one another he begins to move them from pen to pen, or instructs their owners to move them. Before you know it a crowd of kids are catching chickens, holding them against their body or hanging them upside down by their feet, walking around each other, putting them in different places. Most of the chickens allow themselves to be caught fairly easily. They’ve obviously been through this before.

To my disappointment, the poultry judge was very brief when it came to justifying why one bird was better than another. I had hoped to learn something about what makes a good chicken. He preferred to say things like “this first rooster is a very fine bird. Its owner should be proud. Heck all the kids should be proud. It’s not easy picking one of these birds ahead of another.” The closest he got was calling one particularly skinny chicken “leggy.” You can’t learn much if the judge doesn’t point out good and poor characteristics of the things on which he’s passes judgment. 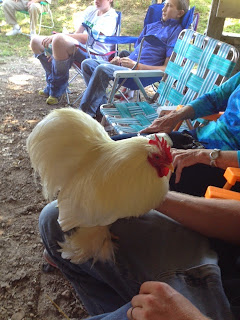 But it was in the poultry barn I met an old friend. My wife keeps telling me I should get out more and I generally tell her I think that’s overrated. But in this case I was very glad I decided to make an extra trip to the fair. The old friend was a foster Mom I’ve known for twenty years. She and her husband are 4-H leaders and big into chickens.

Actually, more and more people are into chickens these days. They’ve become almost fashionable. The chickens are not aware of this however. Fortunately, popularity has not gone to their little heads. They remain the same, somewhat aloof, very interested in pecking whatever is on the ground. It’s us humans who have changed our opinions on chickens; wild after organic eggs, interested in the exotic breeds, intent on besting each other with fancy chicken coops. I don’t look for this to last.

“Dave, how are you? I miss your blog. Ever since you retired I stopped getting it.”

“I’m still writing it. Give me your e mail address and I’ll put you on the list. Say, how is Paul? (Not his real name.) He must be in high school by now.” Paul was a foster boy she and her husband adopted during my time at YSB.

“He’s joined the National Guard and has done training. He loves it. After he completes that, he’s planning to go to IVCC and study criminal justice. He wants to be a policeman.”

“God that placement worked out well. He came to you at a very young age if I remember.”

“Just turned three. We took him for respite. Jami asked on a Friday morning if we could keep him till Monday. He’s been with us ever since.”

“How good for him. Thank you for making him part of your family.”

“He’s a great kid. Not that it’s been easy. But we stuck with him and he stuck with us. This is the first year Paul has not had projects at the fair.”

“4-H was great for Paul. In 4-H he was just one of the kids from Brookfield Township. It wasn’t about him, it was about his chickens, or his vegetables, or whatever he was working on. I think 4-H was a way for him to find out who he really was without adults.”

That’s the kind of news I’ve missed during this past year of retirement. Kids succeed, foster families excel at their role, adoptions happen, lives are saved, and no one knows. I miss that. I think of avoiding the stress of things that go wrong and I lose sight of the good news that occurs over and over when things work as they should.

So that’s the week. The situation in the Mideast goes from bad to worse, fools with powerful weapons create a dangerous international incident, and important events all over the globe lose focus, pushed into the background by the latest crisis. But at the same time, kids show their cows and chickens at the 4-H fair, adults in the community support them, winners take home blue ribbons, and life quietly goes on. Everyday triumphs are barely noticed.