I unwrapped the Moon Pie on SC Route 321 en route to Fairfax and it was dry.  I should have known better and bought banana, Moon Pie’s original flavor.  Salted Caramel is probably considered exotic in rural South Carolina.  God knows how long that Salted Caramel Moon Pie was on the shelf.  Maybe even he doesn’t know.

Fairfax had a traffic light.  Gifford was next, then Laury, before going through the relatively big town of Estill which had both a Family Dollar store and a Laundromat.  I’m guessing those two establishments draw a lot of people to Estill.  Where the residents of those little rural towns work or spend money is not clearly evident but one thing is certain, if those inhabitants do not have a vehicle their world would be very constrained and limited.

The land was flattening out completely and live oaks were starting to appear.  If I had to guess, I’d say at some point there I’d entered the low country.  As I approached Scotia I decided I needed company of one kind or another and peered into my CD sack, where I found a bootleg copy of the Armadillo album.  Its real name is Leo Kottke 6 and 12 String Guitar but for some reason the record company, Takoma, put a big Armadillo on the album.  The rest was history.

Leo Kottke was a kid whose parents moved around a lot.  Before he graduated high school he’d lived in twelve different states.  His family was musical.  He learned violin and trombone before picking up the guitar, which he has yet to put down.  A close brush with a firecracker as a kid and a later incident at a firing range in the U.S. Army got him an honorable discharge and serious hearing problems.  Some think that made him dive deeper into his guitar.  He attended college but quit, choosing instead to hitchhike around the country working as a busker, playing guitar on the street and wherever he could to earn money.  He eventually ended up Minneapolis.  Armadillo was his second album, is still his biggest seller, and continues to define him.

Armadillo was recorded in one afternoon, in exactly the running order of the album.  Most tracks were done in a single take.  You can hear a string break on “The Sailor’s Grave on the Prairie:” and he goes on to not only finish the song but include it on the album as is.  In the liner notes of a later anthology Kottke writes of Armadillo “the record took three and a half hours to do, and all I had to do was sit down and play everything I ever knew.”

A good review in the Rolling Stone helped Leo’s career.  Carl Bauer wrote: “With all the shit that has been released recently, it was a distinct pleasure to come across this album.  Kottke isn’t a new addition to the…school of grating, hypertensive guitarists, is you were expecting that.  He’s an acoustic guitarist from Minneapolis whose music can invoke your most subliminal reflections or transmit you to the highest reaches of joy…anything in addition to his guitar would be superfluous.”

I couldn’t agree more.  I know why Kottke doesn’t sing, as good as his voice might be it would only take away from that beautiful guitar.  I put the CD in.  As the notes filled the Buick I almost had to pull over it hit me so hard.  Why don’t I listen to music I love more often?  I remember when I first heard it.  I’d never heard a 12 string guitar played before.

“What band is this?” I asked.  It was the same kid from Tinley Park in the dorm.  By this time he had quit going to class entirely and never left the dorm.  He only played guitar and listened to albums.
“It’s only one guy.  One guy, one guitar.  Can you believe it?”

I almost still can’t.  The style Leo Kottke was playing then, before tendinitis forced him to change, is known as polyphonic finger picking.  It’s done with complicated thumb and finger picks, is extremely fast and complicated, and yet even at the fastest tempos the notes are clean and crisp.  At least Leo’s are.  Some songs he plays on a twelve string, others on a six string, some with a slide.  Every song on the Armadillo album is written and played by Kottke except for “Jesu Joy of Man’s Desiring” written by a guy named Johann Sebastian Bach.  Leo plays one of the most beautiful versions of that song you will ever hear.  On the morning of my wedding in 1982, attended by six people in addition to the two of us in a house in Seattle, I went to the market and bought a vinyl copy of Armadillo.  It was spinning on a turntable when she walked into the living room where I was standing with the minister that afternoon.  I put the needle down on that song.

Thirty three years and some change later my wife and I had our first conversation about this year’s road trip.  I was eating steel cut oats at the kitchen counter early in the morning, and we were talking about our upcoming trip to visit her brother in Tampa and her sister in Sarasota.

“I’ll drive the Buick down again, you can fly one way and ride home with me.  I think this year I’m going to go farther east and head south through West Virginia.”

“Oh shoot.  I didn’t think you’d want to do that again.  Why do you?  Why do you want to be alone out there?  I worry about you so much.”

“Please don’t worry about me honey.”

We go through this a lot.  After she retired and was home to see me off to work each day she would ask me if I had my phone as I was rushing out the door and then she would call out

To which I would respond, sometimes from the garage

Only to hear her constant response

She’s right.  She knows me well but doesn’t understand what it means to me to be alone out here.  It’s important.  How can I explain it?  I think maybe Leo Kottke knows.  I hear it in his songs.  I imagine him hitch hiking with his guitars, anxious to get to a place where he can play, the songs running back and forth in his head.  Listen to this one.  It’s the opening song on Armadillo, the first many ever heard from Leo Kottke.  It’s less than two minutes long and called “The Driving of the Year Nail.”  You can minimize it on your screen and listen while you read.  Turn it up loud.  As you listen think how he must have felt imagining this tune, creating it, playing it.  The music comes from somewhere that lives next to the energy and freedom I feel when traveling alone.

There’s a good chance that didn’t explain it for you.  Just as I know words can’t express music adequately neither can music explain motive in language we both understand.  I’m afraid you still don’t know why I’m out here.

When you travel alone everything is possible.  I learned that as a young man traveling solo.  There are no compromises.  Each turn, every intersection, all the towns, every new face, is an opportunity.  You decide if you take that opportunity or not.  Only you.  You venture forth or retreat, but no one decides for you.  Every day, every hour, every moment your life unfolds before you and is new.  The world is yours for the taking.  Nothing and no one holds you back except yourself.  And if you do it right, you lose yourself.  You become a mirror to the world, and the world is bright.  It shines.  I swear to God what I feel out here is life itself.  Whatever it is, I can’t get enough of it.  I need it like food and water still, even though I’m now old.  I don’t want it to end.

I kept driving.  Past Garnet was a little town called Robertville, which was unremarkable really except for the first Spanish moss I noticed hanging from the live oaks growing by this beautiful church.  I had to pull over.  It was too pretty to pass by. 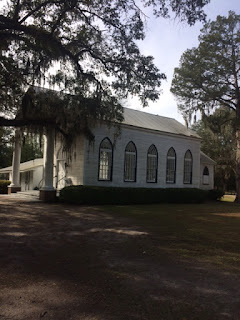 ROBERTVILLE-named for descendants of Hugenot minister Pierre Robert, it was the birthplace of Henry Martyn Robert, author of Robert’s Rules of Order and of Alexander Robert Lawton, Confederate Quartermaster General.  The town was burned by Sherman’s army in 1865.  The present church was built in Gillisonville in 1848 as an Episcopal church, moved here by Black Swamp Baptists in 1871.

So there you go.  If you’re big on order, which I’m pretty ambivalent about myself, this is the town for you.  Also you have to admire the pluck of a little town like Robertville.  Burned down and built back.  Wouldn’t you be tempted to move the hell away if your entire town was deliberately burned down?  As it turns out Sherman’s army crossed the Savannah River from Georgia at Two Sister’s Ferry down the road, starting the Union’s Carolinas Campaign which was marked by orders to destroy assets and strike a blow to Southern morale.  Nearby plantations Pleasant Hill and the ruins of Black Swamp Plantation can still be visited.  Many slaves fled those plantations and joined Union forces on the day they burned Robertville.  The South underwent sudden traumatic change.  And there I was 151 years later standing in that rebuilt town next to a beautiful church moved there to bolster Robertville’s identity.  Was I the same man that on the first day of my trip expressed concern for the future of Leroy, Illinois?  I suspect Leroy, IL and Robertville, SC, will be here long after I’m gone.  I may not be able to imagine a future for rural small town life in America, but don’t bet against it.  Human beings and the spirit of the communities they inhabit are stubborn.

My journey through South Carolina was nearly over.  I put the Buick back on SC 321, drove through Tillman, and got on Interstate 95 at Hardeeville.  My next significant date with destiny that day was supper in Savannah Georgia.
Posted by Dave in the Shack at 9:51 AM