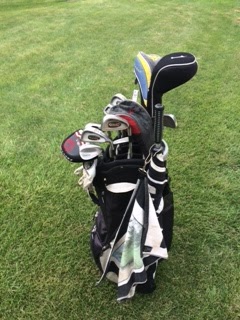 I surprise myself sometimes.  While I was golfing last Friday someone brought up the state budget in casual conversation and I heard myself go off on a rant.  I’m not sure I get out enough.  Anyway I recognized it as a rant pretty quickly and managed to contain myself.  I hope it didn’t affect anyone’s game.
This was Friday morning golf, which is different than Tuesday afternoon.  Tuesday afternoon golf is a small group of eight guys, invited via e mail, who move to a different course every week, play their own ball, and golf a group game, collective scoring of birdies and pars, without wagering.  My wife calls Friday morning the old guy game.
“Which group is this?  Is this the old guy game?  Where you never know who you’re going to play with?”

The old guy game is a standing event of sometimes 60 guys.  They play the same little nine hole country course every week, flat as a pancake and without a lot of trouble.  If you hit an errant ball you can play it down the adjoining fairway.  It’s pretty forgiving.  The old guys play an entirely different format from the Tuesday group.

The old guy game is a scramble in which you play the best ball hit by your team on each shot.  All you have to do is show up, pay the money and you’re in.  The money is pretty reasonable.  Nine holes with a cart is $17, and the organizers collect $3.25 from every player which goes into a hat and is paid out as prize money in the end.  The top four finishers are in the money, which includes splitting payouts for ties.  They keep track of putts in order to keep ties at a minimum but they still happen.  My team recently tied for 4th place and each of us got $2 back.  You’re not going to get rich on the old guy game.  Closest to the pin on one of the par three holes pays something.  I’ve yet to win that so I don’t know how much.  Not much I’m thinking.

Actually that little feature of keeping track of putts changes the game.  At times the team chooses to play a ball just off the green rather than a long try on the putting surface to reduce their overall putts in the event of a tie.  There are guys who think golf is not worth playing if you don’t put money on it.
By far the best feature about the old guy game is that the teams are random every Friday.  They do something with a deck of cards, the organizers do at their table in the corner where they keep the sign in sheet and collect the bet money.  The result of what they do in turning over the cards somehow is that team members are constantly shuffled.  When 9:00 a.m. comes they call out the numbers and names of the foursomes and we go outside and sound off our numbers until we find our team.  I’ve not yet played with the same team and I’ve played most every Friday all summer.  That’s refreshing.  You don’t get cliques of old guys who don’t let others on their team.  You meet everyone.  It’s sort of a fraternity of old guys; a collegial group of peers, egalitarian even, united only by age.  I’ve yet to be paired with anyone on Friday morning with whom I haven’t enjoyed golfing.
When I say they’re old I mean it.  I’m possibly one of the youngest.  The ultra old, those over 80, get to hit from the red tees.  I’m convinced it’s a decided advantage to get one of the 80+ guys on your team.  Invariably they are in good shape and golf well or they wouldn’t be out there.  The stuff they say about old guys is generally true.  They may not hit it as far as they used to but it’s typically in the fairway, and they tend to have good short games.  I was reunited with an old guy I knew from my past life as a caseworker with adolescents.  He was a school administrator and coach at a little area school which referred kids to YSB.  I didn’t have direct contact with him but with our mutual friend the former school counselor who was a renowned nice guy.  He passed away a few years ago.  The guy very much alive and golfing well is 87.  We used his ball a lot.  He hit from the red tees which are, after all, a big advantage.

So Friday we’re waiting to tee off and this talk of the state budget comes up.  We don’t talk a lot of politics but like every group of people in Illinois the budget affects us, our families, and our community so we are interested.  One of the guys remarked that the governor didn’t appear to get much of his agenda passed.  None in fact.  That’s when I went off.

“Rauner could have made that same god damned deal a year ago.  He kept the whole state in limbo, ruined social service agencies, impacted the decisions of college students, took food out of the mouths of senior citizens, took care away from runaway kids, the mentally ill, the homeless, and the addicted while putting Illinois in deeper debt than it’s ever been.  And for what?    Political advantage?  In a presidential election year with Trump at the top of the ticket?  Give me a freaking break.”  I didn’t say freaking.

The question just sort of hung out there.  One of the guys began looking for tees in his bag.  Another murmured something and changed clubs.  I realized I was being loud and opinionated.  Not the kind of manners small town Midwesterners are supposed to display on a beautiful July morning on a golf course.  I toned down.

“I’m just saying that whole fiasco got us nowhere.  We don’t have tax reform, we didn’t create new revenue, the school funding formula goes on as before, as do worker’s comp and public pensions. We’re stuck in the same place we’ve been for years and everything is put off for six months.  We didn’t change a thing. We made it worse.  It makes me mad, but actually it is just so sad.”

It was my turn to hit.  I teed it up and hit it a long way.  Apparently I was energized.

Had I waited till 65 to retire, and left on the last day of the fiscal year as I did three years ago at age 62, last Friday July 1, 2016 would have been my first day of retirement.  If I had stayed I would have fought through a year and a half of the Rauner administration as the director of a largely state funded social service agency, the last year one in which contracts supporting important programs in my agency were not paid a dime for a full twelve months.  Then Governor Rauner, on what would have been the very last day of my career, would have caved as we all knew he would have to, made a deal which accomplished nothing but damage and pain for Illinois, and I would have gone home for good.  That assumes I could have made it through the last three years.  They say timing is everything.  Thank God I left when I did.  I still feel the stress and I’m not even there.

I’d rather be golfing.
Posted by Dave in the Shack at 7:35 AM