A brace of ducks skittered off the water as we rounded the first bend in the Musclow River.  We had eased slowly into the river from the west side of Job Lake.  The ducks flew low with the pines as background and then rose, clearing the tree line into a blue sky where we could see them more clearly before they flew out of sight.  Buffleheads we thought, maybe Mergansers.  Four of us in two boats were on our way to fish Century Lake.  We were worried about the portage.  At least I was.

I was one man in a group of seven on the fourth day of a week long fishing trip in Northern Ontario.  On the dock in Red Lake while we were loading the plane for the flight out, we asked the pilot about that portage to Century Lake.
“We finally got rain a while ago so the water should be up, rocks not a problem.  But it will be soggy on that portage.  Party I flew out a few weeks ago said it was a slow go.  An hour or more.  You gotta be in shape I‘d say.  Be careful.  The fishing should be good though on Job and Robert.  Century is catch and release. Can’t keep ‘em you know.”

We knew that.  It wasn’t the keeping but the catching that appealed to us.  We’d heard great things about Century Lake.  We all wanted to fish it.  But that report discouraged us.

Our flight out of Red Lake in an old De Havilland plane with a new turbo engine was delayed by low clouds.  Fine with us.  We prefer our pilot not take chances.  But because of the wait we didn’t get unloaded, sorted out into our bunks in the cabin, and into the boats with our gear set up and jigs in the water till almost two.  Despite the slow start we fried fourteen walleye that night for dinner along with salad and beer.  The eating was nearly as good as the fishing.

We follow the rules up there in Canada. We all bought eight day conservation licenses which allowed us to possess each day various numbers of fish by specie.  We were fishing for walleye and the daily limit was two.  Between ourselves we decided to release anything under 15 or over 18 inches long.  No young fish with a future and no old fish that are most important for breeding.  We harvested only the mid range fish, and they were abundant.  We take no fish across the border going home. The walleye were hitting hard that first day.  It was good to feel them on the line again, nearly a year since I’d felt that much anticipated tug.

We each kept our best two fish on stringers only on days were needed them for dinner.  We released them immediately on the off days.  We ate walleye fried, baked and served with a butter caper sauce, and in fish tacos with a choice of homemade Mexican red and green sauces.  We ate well up there, and decided to mix up the menu more than in previous years.  We brought steaks as always but also chicken breasts marinated and frozen in Jamaican jerk sauce, and penne pasta with a good homemade meat sauce.

Breakfast featured bacon nearly every day.  We order bacon from the outfitter in Red Lake that is cured and cut by a local butcher. I don’t know why it’s so much better than our bacon at home but it is.  We had bacon with pancakes and eggs, bacon with omelets, biscuits and gravy (skipped the bacon that morning and suffered a few complaints) along with BLT’s for lunch.  Some summers the tomatoes don’t last in our local gardens till Labor Day but this year we had plenty, along with home grown garlic and freshly picked Illinois peppers.  I almost added bacon to the homemade chili for Wednesday’s lunch but decided against it, believing that would be extravagant.  I can’t imagine groups in other cabins eating better than us.

The cabin was equipped with four boats.  Three boats switched off partners each day and one of us fished solo in the remaining boat.  Everyone fished with everyone.  On the day I fished with Bob, the only one of us with prior experience on Job Lake, we went down to the river leading into Robert Lake to fish the shallows and also to travel the river and see how the first portage into Robert Lake looked.  Bob had heard rumors of moose sightings in the river, so he put the motor up a notch and ran shallow and slow, carefully keeping the motor at the same speed so the noise from it became a steady drone rather than a rise and fall more noticeable to a moose.  Better to sneak up on them grazing the river.

Moose who stand on those long legs in the shallows, often with their head in the water, are eating plants like wild rice.  There were big beds of wild rice in the Musclow, but as quiet and stealthy as we were we encountered nary a moose. 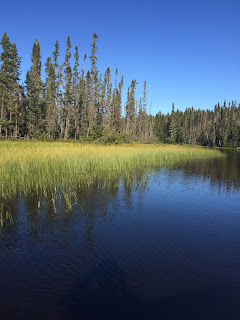 We did encounter two fishermen, the only other humans within miles we believe, staying in a cabin on Robert Lake, who had made the portage from there and were heading up the river to fish Job Lake for the day.  As their boat neared we began to talk.

“Have you seen any moose?” Bob said.

“Not a one.  Thought we saw some tracks on the portage though.”

“How are the fish treating you?”

“Good, especially on lower Robert.  How is the fishing on Job?”

“Have you been to Century?” I said.

“Went yesterday.  It was unbelievable.”

“How was the portage?” I said.

“Not as bad as we were told.  They built a new bridge platform over the worst stretch.  It only took us about half an hour.  You have to go slow and watch your step, but it is more than worth it.”

That was a different story than we’d been told.  Maybe the pilot was trying to discourage us?

“The two of us caught a hundred fish between us in one boat.”

I’d never heard such a thing or imagined the possibility.  A hundred fish.

Fisherman and the truth are easily separated, even among the most religious of anglers.  But if it the fishing was anything close to that good, even accounting for the brag, I knew I had to go.  Our boats were passing out of earshot.

They hollered back, their response faint.

That night over Bushmills Irish whiskey and Molson Ale we planned the trip.  Four of us would go first and advise the other three as to the rigor of the portage and the advisability of going.  The youngest and those in the best shape would go first.  I fit neither category.  I was the oldest and of those four and definitely the most gimpy.

“I’m going to have to go slow,” I told them.  “I got this right knee and left ankle thing.  I’m telling you, I could hold you up.”

They wouldn’t let me talk my way out of it.  The plan was to free our hands, mostly mine, carrying as little as possible so we could grab onto trees and stumps and break our fall if we stumbled on the trail.  We wouldn’t take full tackle boxes, stringers, depth finders, or nets and we would use backpacks to carry bait, boat gas, jigs and only a little tackle, lunch, and small coolers.  We had two portage poles, which broke down into four pieces and fit into short cases so they wouldn’t catch on trees and brush.  We would go in early morning, fish all day, and make the trip back while there was plenty of light.  We had only to hope for good weather.
Most days started still and cloudy, cleared up midday as the wind picked up, only to have the clouds return by evening.  We’d been hoping for clear nights.  You never see more stars than when you are way up in the north woods.  That night the sun set and the sky remained clear.  Our necks got stiff from looking up.  It was a waning crescent moon, just a sliver.  As it got darker more stars came out.  Before we turned in for the night the Milky Way was a bright carpet across the eastern sky.  The big dipper was huge, the front two stars of the pail pointing to the North Star.  Cassiopeia was there, like a big W, and I thought I saw the seven sisters.  I wish I knew more.  I wished I was a kid back home on the farm.  We would turn off the pole light and I lie on a blanket in the front yard next to Mom.  She knew them all.  We’d follow her finger, squinting with one eye, and pretend we saw them too.

We had a standing agreement that if anyone got up in the middle of the night and saw the Northern Lights they would wake the others.  That night, I don’t know when, I heard the call.  It was a cold night and not everyone chose to come out, some stayed in the warmth of their sleeping bags.  As I stepped onto the deck and looked north a dancing finger of pale green light, eerie and otherworldly, made its way through the middle of the big dipper.  No one among the small group standing in the cold spoke. The silence was intense. As we looked at the sky wolves howled far off.
The sky was still clear the next morning.  After bacon and eggs with pancakes, four of us in two boats headed to the west side of Job Lake where we entered the Musclow River and scared up the Buffleheads (maybe Mergansers).  The trip down the river was short.  By the times we reached the falls the sun was still hidden behind the pine, spruce, and birch forest that surrounded them.  Job Lake is some twenty five feet higher than Job.  The river falls and tumbles nicely over large rocks before it opens up into Robert Lake. 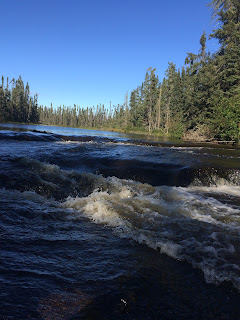 We nosed our boats into the bank at the top of the falls and tied them next to portage boats placed there for fishermen camped on Robert heading the other way, like the ones we met the previous day.  We didn’t take extra care in packing up for the walk around the falls.  It was less than a hundred yards.  At the foot of the falls two boats awaited us.  We took them a short distance straight across the upper portion of Robert Lake and entered the river again, winding our way into Moose Lake, hooking around the first point to the left and finding the portage to Century.  It was obviously much less traveled.  There were weeds around the tie in.  The bank rose steeply.

It was getting warm as we began to organize for the long walk.  I took off my jacket and flannel shirt.  As I did I told myself that my right knee, although it may send shooters of pain up or down my leg from time to time, doesn’t really give out.  When it feels as if it does that’s just my brain automatically trying to take weight off the joint to avoid the pain.  It will hold steady even though it hurts.  And my left ankle, despite not allowing  my foot to fall flat when I step nor bend as much as the right, won’t turn or throw me off if I am deliberate and careful.  I would not hurry and hope for the best.