There’s not much Kentucky between Cairo and Tennessee.  Before I knew it I was crossing the state line on Route 51 into South Fulton and heading down Route 43 to Greenfield, Tennessee.
Route 43 was still a little well traveled for my taste.  I was looking for America’s backcountry.  At Greenfield I turned off on Route 54 and headed toward Trenton on my way to Humboldt.  The towns thinned out considerably.  About the time I turned onto Rt. 54 the sprinkles on the windshield turned into bona fide rain.  I switched my wipers from intermittent to low and hunched forward a little in the seat.


I’d been worried about the weather all morning.  I made the mistake of overhearing a local weather forecast while I was eating breakfast, those instant scrambled eggs they serve you, and they talked about a strong belt of heavy rain extending from the southwest heading northeast.  The creeks, streams, and ditches  were full of water.
It had been raining for days.  I was a little concerned back in Kentucky when I passed Bayou de Chien between Clinton and Crutchfield.  Bayou de Chien translates roughly to “slow-moving creek of the dogs.”  I thought bayous were further south, like in the Louisiana swamp.  Bayous are typically low lying areas attached to a bigger body of water, a lake or a river, and have very little current.


But what did I expect?  I was following the Mississippi River, which drains the world’s third largest watershed area.  If you look at a map of the continental United States, the Mississippi basin brings water from the Eastern slope of the Rockies; Idaho, Montana and Wyoming, and the Western slope of the Appalachians.  It’s over a million square miles, just behind the Nile, both of which are less than half the area of the Amazon River basin.  I wasn’t thinking of that at the time.  I began to pay as much attention to the rivers and streams on the map as the Tennessee back roads I’d chosen to travel.
The intrusion of modern life on those Tennessee woods was growing less and less all the time.  It was not readily apparent how people were making a living down there.  There was some pasture and beef cows, your occasional plowed field getting ready for a crop of some kind.  But there was not much in the way of commerce, aside from Dollar General and gas stations  I was a little mystified by the economy, but that interest was soon overtaken by the weather.


One thing seemed clear however.  Rural Tennessee car owners do not believe in trade ins.  Most country places appeared to have every vehicle the family ever owned surrounding their modest homes.  Cars and trucks, running or not, and your occasional pile of car parts, were a definite feature of the landscape.
Past Humboldt I encountered the unincorporated collection of houses and sheds known as Frog Jump.  Somewhere before Owl City I entered Hayward County.  The next county would be Crockett, which had to be named after Davy wouldn’t you think?  As it turned out I never made it to Crockett County, because to get there I had to cross the south fork of Forked Deer River.  It was raining even harder as the Buick nosed down a little valley on a wet two lane pavement.  I turned my wipers up to high.


You could almost see it coming.  Full ditches, big sheets of water in the pastures.  I’m not sure what constitutes a flash flood but there was a lot of water around me.
You have to understand that when they built the interstate highway system they didn’t follow the lay of the land.  They changed it as they saw fit.  Graded the curves nicely and gradually so cars didn’t have to reduce speed, created overpasses, taking earth from adjoining land creating borrow pits, built up the low places, knocked down the hills.  The roads we travel most often, while not quite weather proof, are much less susceptible to floods, blizzards, and extreme weather than secondary roads, let alone the two lane track between Frog Jump and the Crockett County line.  As I got closer to the river I could see I was in trouble.


There was a big pond at the bottom of a flattened out valley that in normal times must have been but a small river.  In the middle of the pond was a bridge.  The bridge was above water, you could see a little sliver of open sky under it, but getting to the bridge was obviously a problem.  There was that, followed immediately by driving through the pond on the other side of the bridge to open road.
At the point where Tennessee Route 54 disappeared into the pond was a dump truck with Tennessee DOT painted on the door.  He didn’t have his flashers on.  Just parked there.  I stopped a little behind him and surveyed the situation.


I began something of a risk inventory by thinking of what was underneath the Buick.  I had fifteen inch wheels and fair clearance.  Between my feet and the surface of the road was what exactly?  A foot maybe?  A little more?  And in that space I had an exhaust system, an oil pan I imagine.  But being that the Buick was front wheel drive not much of a drive train.  I had a catalytic converter I suppose.  There were brakes to consider.  But brakes dry out.
Close to the river channel, wherever that was, there was would be current that could float a stalled car off the road I supposed.  But the water would have to be damn deep to kill a V-6 engine and sweep my full size Lucerne down the south fork of the  Forked Deer River.  That’s what I told myself anyway.


On the other side of the pond, an equal distance from the bridge, was another state truck.  As luck would have it a jacked up pick up, which had the look of a four wheel drive outfit, pulled up by the truck and began talking to the state worker inside it.
‘This is great,’ I thought.  ‘That four wheel drive pickup will drive through the pond and I’ll be able to see just how deep it was.  Besides that, he’s probably a local and I’ll get to see just where the road is.’


It looked like a straight shot to me.  Head to the bridge, cross it, go straight across the pond on the other side aiming towards the road ahead and up the hill.  I had a plan.  Now all I needed was for that truck to drive across and show me just how deep the water was.
In a few minutes the truck lurched forward, stopped, turned around, and drove off the way it came.  That was enough for me.  If he wasn’t willing to try it, I was out.  Discretion, I have learned, really is the better part of valor.  I shut off the Buick, put on my jacket, and went out in the rain to talk to the guy in the truck.  He rolled down the window and pulled the bill of his cap down.


“Well this rain is slowing me down.”
“Yeah.  There’s flash flood warnins out.”


“What’s the best way around this?”
You can go back to County Line Road, Take a left, go about a mahl, swing around and get on a ridge out there.  There’s a better bridge across the river on County Line.  Higher.  It ought to be all right for you I’d think.”


“Thanks a lot.”
As I walked away he called back


“Good luck.”
I’d rather he hadn’t said that really.


I drove as directed and about a mile down County Line Road I encountered a flag man, a whole line of trucks, and beyond them a backhoe.  He didn’t look any too happy to be out in the rain.  His truck had the Hayward County logo on the side.  I stuck my head out the window.  He walked up to where I was.
“What’s happening?”


“Road’s closed.  Culvert washed out.  Going to take most of the daiy to get it fixed if then.”
“How can I get to higher ground and cross the river back there?”


“No Sir.”
He was smiling.  Rain dripped off the bill of his cap.


“When you order breakfast wut do you order with hayem?”
“Eggs.”


“That’s the road you want.  Aig Hill.”
I laughed and so did he.  I felt dumb.  And to think we were both speaking English.  As I got further south my ear got better, and I embarrassed myself less.


I never found Egg Hill Road.  It started raining harder.
I bailed out to Rt. 412 and headed west to Maury City where I would pick up Route 88.  It looked bigger in the road atlas.  But before I got there I was stopped by barricades.


I was going nowhere fast.  I decided to get off the road, get a bite to eat, consult with the locals, and reassess my route on a bigger scale.
Damned if I could find anywhere to eat.  Closest I got was this defunct converted eatery/gas station, which at one time proclaimed they were serving pizza.  I’d say the last wedge of pepperoni pie was sliced some time ago. 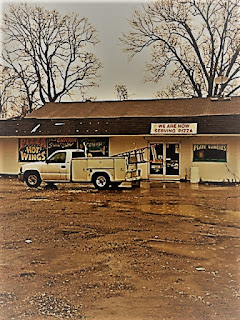 I pulled under the canopy, which used to shelter the gas pumps, got out of the rain, walked around the Buick to stretch my legs, and took a serious look at the atlas.
If I really was in a storm system headed north and east it made sense to go west.  I’d spent half the afternoon in Tennessee, and hardly gone anywhere.  I decided to get to a bigger road, quit screwing around with these blacktops, and head west to Arkansas.

Somehow I got to Gates, got on 51 South (my god how far south does 51 go anyway?) and went to Covington, which put me on a path to Memphis.  I didn’t want to go to Memphis, but I needed bigger, better, and higher roads.  I’d find a way to cross the river north of Memphis if I could.


I couldn’t.  I’m sure there was a bridge somewhere short of Memphis, but I couldn’t see it on the map, and I didn’t want to spend time looking for one.  51 became Interstate 40, and I crossed the Mississippi once again on a big four lane bridge into Arkansas.   It was hard to see the river, but what I saw looked wide and very fast.
I hate being on the interstate in heavy rain.  40 West was full of semi’s and they threw a curtain of rain up from their tires that covered the Buick.  I didn’t see much, but managed get out of heavy traffic on Rt. 795 to Marianna Arkansas, then back on 40 W. for a short bit to Forrest City.


I was in constant heavy rain.  It’d been a long day.  I called it quits in Forrest City at a Holiday Inn Express.  Out of the backwoods and into mass market interstate commerce where everything was bright, shiny, and clean.
The young woman at the front desk greeted me with a big smile