Sara Dady for Congress in the 16th

If you are Republican with strong party loyalty, feel free to skip this post.  I’ve had a few readers ask to be taken off the e mail list following my posts on immigration, and have been unfriended on Face Book due to my politics.  I get it, and I’m more than glad to stop filling your inbox with material you don’t want to read.  I hesitate to write about politics these days because it’s getting harder and harder to have productive conversation.  Emotions run high.  It’s the times we live in.  But I can’t help it.  Dave in the Shack is about what I think and feel, and I can’t avoid this.


My U.S. Representative in the House, the incumbent, is Republican Adam Kinzinger from Illinois’ 16th District.  His opponent, challenging him for that seat in Washington, is Democrat Sara Dady.  I’m supporting Sara in the midterm election November 6.  I have her sign in my front yard. 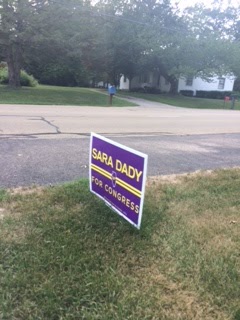 The truth is, we had four very viable democratic candidates willing to challenge Adam Kinzinger in the March primary, a welcome change to years when no candidate or only a token candidate was on the ballot.  Sara Dady, an attorney from Rockford, built a law practice from her living room 10 years ago to be the biggest immigration firm outside the Chicago Metro area.
I’ve invested more time, read more, and argued more about politics since the 2016 presidential election than any other time in my life since the Vietnam War and Watergate.  At times I feel overwhelmed.  But rather than pull back and keep quiet, the easy route believe me, I am determined to do something.  Put my money where  my mouth is so to speak.

The best way to counter the dangerous and alarming politics employed by this administration and stabilize the country is for Democrats to take control of one of the chambers of congress.  The best opportunity is the House of Representatives.  How do you involve yourself in that effort?  I think you work to effect change where you live.  I pledged that I would not only personally contribute to Sara Dady’s campaign but to seek other donors and raise $2,000 to help her take Adam’s Kinzinger’s seat in congress.  Here’s where I am with that.

I persuaded two donors to jointly provide a $1,000 matching fund for small donors who want to have an impact on their country and its policies.  Those donors will match your contribution dollar for dollar until their $1,000 runs out.  Maybe you’ve never given money to a political candidate.  Maybe you questions what difference you can make.  Let me address that.

Adam Kinzinger, according to recent reports in The Times, has spent about $1.4 Million in his re-election campaign and has roughly that much more left in his campaign fund.  He has received $866,574, or 35% of his funds from political action committees in 2017 and 2018 with Verizon, Ameren, AT&T, Caterpillar, and Comcast among his top contributors.  Small donors, giving less than $200, make up less than 2% of his re-election committee’s receipts.

Giving to political campaigns is different than giving to charity.  When you support a person for public office, especially one challenging the incumbent, you invest not only in hopes they win but in promoting issues which you feel are important.  Political campaigns test the viability of ideas.  When done well they make us think.  They move us forward.  They challenge the status quo.

Sara Dady shares my issues.  She believes the best way to solve the opioid crisis is to offer and fund more treatment through expanded Medicaid coverage.  Until we do that we spin our wheels.  Adam Kinzinger voted to repeal the Affordable Care Act over and over and it still has not been replaced with a coherent plan.  We remain stuck in a fragmented employer based health system that costs too much and shuts people out.  Medicaid for All, in one form or another, is the direction in which we need to move.

Sara Dady wants to expand educational opportunities for people of all ages at all levels, and find a way to allow current students to refinance crushing college debt at an affordable rate.  She supports an increased federal minimum wage to close the economic disparity that continues to grow.


And who better to be on a congressional work group to design and implement comprehensive immigration reform than a practicing immigration attorney?  Sara Dady advocates reform that includes a real worker visa program tied to actual labor market demand and increases due process in immigration proceedings of all kinds.
For a more complete look at Sara’s stand on the issues go to https://www.saradadyforcongress.com

That’s what I want my representative in Congress, the person we elect to represent our interests, to work towards.  And so I’m helping her campaign by giving her money, by writing this piece, by continuing to help her get her message out.  I’m hoping you’ll join me.

I don’t have one of those fancy kick starter buttons to click on.  I’m doing this the old fashioned way.  Send a check to me made out to Sara Dady for Congress.  You don’t use checks much anymore but you’ll find some lying around your house.  They’re made of paper and you fill them out with a pen.  They require your signature.  Send them to me and I’ll see they are delivered to Sara Dady on Saturday August 26th at a fund raiser along the river here in Ottawa where she will be present.


If you live in town and would like to save the price of a stamp you can put it in the big mailbox opposite that address.  It’s Cubby blue. Please don’t give me cash.  Your cancelled check is your receipt.  Your gift will also be acknowledged by the Sara Dady campaign.


Getting to $1,000 can be done lots of ways.  Ten $100 donors.  Twenty $50 voters.  Fifty $20 voters.  Some combination of all of them.  It will make you feel good to do something tangible to affect the politics of our country.


And if you can’t contribute, by all means vote.  If all registered Democrats simply went to the polls on November 6 we would elect Sara Dady in Illinois 16th Congressional district.  Urge people to vote.  If you or someone you know are not registered to vote you can do so very easily.  You can vote early.  But you simply must be a part of the political process to change the shape and the substance of politics in this country.


By being part of the process you can take matters into your own hands.  Vote for a candidate that shares your values.  And if you can support that candidate with your dollars.  I think it is up to us to get this done.


Thanks for reading all the way to the end.
Posted by Dave in the Shack at 3:18 PM