This started when I grew Habanero peppers without a clear purpose.  I liked the looks of them, knew they were hot, and figured they would fit right in with the serranos, poblanos, jalapenos, and those little red cherry peppers I grow.  They didn’t.


The jalapenos are mild enough these days to be used in most anything.  Serranos go great with tomatillos and onion for a Verde sauce, and poblanos can be used instead of bell peppers for kick.  All of them go well in chili.  They’re useful all around peppers.  Sort of like Zobrist for the Cubs.  You can play him almost anywhere.  But the Habaneros are a different story.


I’m not a good judge of peppers because I like hot food a lot and tolerate spicy heat well.  I knew the Habaneros were a problem when I had my family to the house for the annual McClure wiener roast and golf outing years ago.  The golfers used to come early and I’d make breakfast for them.  Usually omelets.  I used habaneros in a nephew’s omelet, one of the more adventurous nephews too.  He took one bite and looked at me as if I’d poisoned him.  They don’t travel well, the Habaneros.  You have to be careful how you use them.  Aside from some insanely hot Thai peppers I grow from time to time, they’re the hottest thing in the garden.


Then I made a Christmas trip to Jamaica with my family and got hooked on Jamaican Jerk.  We were in Negril.  I began asking the locals where they went when they wanted great jerk chicken and the nearly unanimous choice was Bourbon Beach.  We made a pilgrimage there and found a no-name beat to hell shack on the beach with a sheet metal and palm frond roof, a single wall behind the kitchen, an open-air homemade bar and stools in the sand.   A pile of wood was on the beach next to the stove.  The kitchen, such as it was, was mostly a built up brick and concrete block fire pit with wire refrigerator shelves suspending halves of chicken above a wood fire.  On top of each chicken half was a brick.    Behind the bar a barrel of ice held cold bottles of beer.  The menu was jerk chicken, rice, and Red Stripe Beer.


The only choice available was whether you wanted half a chicken or a quarter.  My son and I each had a half.  My wife and my son’s friend ordered a quarter.  Upon hearing the orders the young man behind the bar took the bricks off three chicken halves and placed two on tin plates.  The last half he placed on a board, and whacked it violently with a giant cleaver.  The two recently separated quarter pieces jumped up and settled back on the board.  He put the quarters on two more tin plates, added a spoon of rice to each, and ladled up four small bowls of jerk sauce from a stone crock by the fire.  I figured the sauce would have been baked on the chicken.  Not at this joint.


As locals came to the bar and ordered up jerk chicken I noticed that the young man ladled the jerk sauce directly on their plate, covering the chicken and rice.  Evidently they’d learned to let the tourists control their own destiny spice wise.  My wife tentatively dipped her fork in the sauce and had a sample.  She went sparingly, dipping forkfuls of chicken lightly in the bowl of jerk sauce.  I dumped the bowl on my plate.  It was delicious.  I decided I had to figure out how to make it.


The deal with hot food is that pure heat means nothing.  Within the hotness there needs to be flavor, preferably lots of flavors that hit you at different times.  That’s what good jerk sauce or jerk marinade has, complex flavors and of course, heat.  This jerk sauce had it all.  The young man who served it claimed he had no idea what was in it or how it was made.  He just worked there he said, smiling.  We ordered more Red Stripes.


When I got home from Jamaica I began researching and reviewing jerk recipes on the internet and picked one that made sense to me, made from fresh ingredients.  The recipe I ended up with is a marinade that I use to flavor chicken wings mostly, in a zip lock bag overnight, but also Cornish hens, pork, skirt steak, anything really that you grill.  I think it tastes best to grill whatever marinated meat you choose over charcoal or a wood fire, but you can also add to the marinade and make a table sauce like they did at the joint in Negril.


It’s labor intensive to make, but I look forward to it.  If you’re going to go to the trouble of making this, you might as well make a lot.   It has a lot of ingredients.  I make enough to have several meals, give some to my kids, and serve at a party or two.  It’s an annual thing now.  I’ve taken to growing my own Habaneros, thyme and garlic.   In fact, I’ve been joined in this deal by a friend who grows Habaneros solely to trade to me for jars of jerk.  I make a double batch and give him about half. It’s a good arrangement.


A food processor and a juicer help the process. Here’s the recipe.  It makes a standard food processor pitcher full.  After the first two ingredients mix up each next thing as you go, making it smooth.


2 ½ cups fresh squeezed lime juice         I think it’s worth it to halve limes and juice them instead    of  buying bottled stuff.  Here’s where the juicer really helps.


40 Habaneros                                          Also known as Scotch Bonnets.  I used to cut them and seed them but you run the risk of getting the heat on your fingers, rubbing your eye, hurting yourself in all manner of places in all kinds of ways gloves or not.  They’re mean little peppers. Pick off the stem and throw the thing in whole with the seeds.  Yeah, the seeds make it hotter but what the heck.  If you find it unbearable use 35 next time and throw in a poblano or two in their place.


20 Tbsp. fresh thyme                            That’s about a cup and a quarter.  If you’re growing your own thyme that’s a little more than two plants worth, depending on the year of course.  My thyme did well this year because I planted it in a pot near my wife’s flowers and she kept an eye on it.  Watered it when it was dry.  Next year I’ll grow three.  I was a little short.  Strip the leaves off the big stems with your thumbnail. It’ll make the end of your thumb green for a while but it comes off. 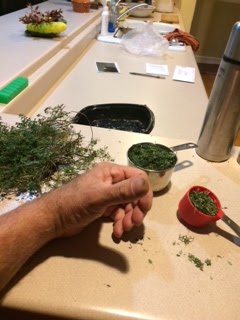 10 Tbsp. fresh peeled ginger               Half a cup more or less.  Forget the fancy gadgets and scrape the skin off with a teaspoon.  Put the skins on a plate and set it on the counter.  It smells great.  Do this after the garlic and it will take the smell off your hands.  Slice it before you put it in the food processor.


You’ve just made the marinade.       That’s what you dump over your chicken wings or whatever you choose to flavor with this Jamaican Jerk and keep in the fridge in a zip lock bag overnight.  If you want to make a jerk sauce, for the table, with or without the marinade, add the following to taste.


Black pepper, with equal parts vinegar and soy sauce.  I don’t know what to tell you about amounts here, other than put the pepper in sparingly, starting with a quarter teaspoon, then add glugs, or dribs and drabs of soy and vinegar till you like it.  Don’t make it too runny or drown it out with the soy.


I can this marinade in pint jars.  A jar does a nice size bunch of wings.  Once it is canned it’s good till you make the next batch, but loses heat slowly after six months.  Even then it’s pretty hot.


Canning the stuff is not nearly as hard as it sounds.  Heat up the jerk and put it in hot mason jars, turn the ring and close the lid half tight, put it in a deep pan just covered with lightly boiling water.  Keep the jars in there about 10 minutes and take them out with tongs.  Put them on your counter on a dish towel.  The lids will pop.  When they pop you know you’re good.  Take the lids off when they’re cool and you’ll find yourself with a future enhanced by the chance of spicy tasty food.
Consider a cold beer.  Hang out by the Weber.  Listen to reggae.  Say “Yah, mon” to someone you love.  Enjoy.
Posted by Dave in the Shack at 4:31 PM